Ethnic Issues in the Politics of Burma: A Karen Perspective 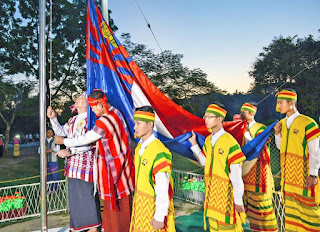 Burma is a country where several ethnic nationalities have been living in adjacent for centuries. All major ethnic nationalities in Burma have their own languages, cultures and traditions that can distinguish them from one another. However, the political rights* of those people have been denied by the ruling Burmese governments. Instead of recognizing the country's diverse ethnic reality and political sensitivity of various ethnic issues, successive Burmese governments have tried to eliminate ethnic movements mainly by means of military offensives.

Since Independence, not only have the concerns of ethnic nationalities never been addressed, but political, cultural and educational rights of ethnic people have been systematically denied. It is true that some ethnic individuals had achieved high positions of government a few years since independence. But ever since Gen. Ne Win took power in 1962 through a military coup, Burma had been ruled by a centralized political system instituted by Burma Socialist Programme Party (BSPP). Top leadership positions in civil services, armed forces and the state administration held by minorities were disproportionately replaced by majority Burman nationals. After the 1947 constitution was dissolved, in 1974, the BSPP adopted a new constitution in which no specification was stated regarding ethnic representation in the government. Instead of leaders duly elected by their people, only a few ethnic leaders were hand-picked by the Burman leadership to symbolize ethnic representation in the BSPP government. Hence, those handful of selected ethnic leaders acted only at the desire of the central government rather than as representatives of their own ethnic nationalities.

I would call such method as "select and rule,"which is still being used by current ruling military regime, the State Law and Order Restoration Council (SLORC). Except for annual folk dance and costume parades on traditional holidays recognized by the government, most ethnic cultures are being eliminated. In the so-called "Union" of Burma, only Burmese language is recognized as the medium of education; none of the ethnic languages is allowed to be taught at schools or allowed to be used at any level of administration. Consequently, ethnic nationality schoolchildren and the young generation are growing up without knowing their own cultures or speaking their own languages. In this way, social and cultural domination has been effectively taking place in Burma today. After all, the "Union" that the SLORC claims, means nothing or makes no sense to the ethnic nationalities. This is one of the most sensitive political issues facing Burma and all her inhabitants, and not only must we discuss openly about it, but all of us must enthusiastically strive to resolve it.

According to the SLORC, at least fifteen ethnic armed organizations have entered cease-fire agreements with them. SLORC thinks that those cease-fire agreements will legitimize its holding onto power. However, beneath the surface of cease-fire agreements between SLORC and fifteen different ethnic nationalities lie a deeper reality of human rights violations and of ethnic annihilation campaign in Burma today. I would like to urge the international community to think about this: who among us will be willing to fight against an army with 500, 000 troops, if the so-called "peace" that is being offered to us could be considered a genuine one? When the SLORC launched massive offensives "against the KNU" this year, villages were burned, many young women were raped and many Karen villagers including children, women and elders were arbitrarily tortured and killed by the SLORC soldiers.

As a result, hundreds and thousands of Karen villagers have fled their villages to the Thai-Burmese border where they hope to find a temporary safe place. While they are afraid of SLORC brutality, those refugees choose to stay in the border refugee camps with a possibility of being forced to return by the Thai authorities. The question is who would know the SLORC's mentality and brutish character more than these refugees do? More than a hundred thousand Karen refugees remained suspicious of SLORC and are fear to return to Burma. Politically naive as they may be, their painful experiencees have taught them severe lessons. How can someone whose village was burned, whose father was brutally murdered and whose sister was repeatedly raped by the SLORC soldiers easily learn to "trust?" How can the Karen leadership ignore the plight of these refugees when they talk with the SLORC? If these people cannot have peace, who will? In one case, a young Karen soldier asked: who could solve the painful dilemma of a young Karen girl who was allowed by SLORC soldiers to choose whether she be raped passively and live or be killed instantly at gun point? The SLORC must bear the responsibility to answer all these questions. Actually, in Burma, peace is not merely the absence of battles; it is something that must be achieved by all the people of Burma regardless of their ethnic backgrounds and creeds. For the time being, SLORC seems to be winning the battles, but not the peace. One thing we have to keep in mind, so long as the ethnic annihilation campaign continues, the spirit of revolution will remain strong in the minds of millions of Karen people.

Towards A Genuine Union of Burma
Among all the ethnic nationalities, the Karen is known as the largest group with an estimated 7 millions population. The Karen have learned their lesson from their experiences throughout the history and especially from the World War II that as a nation, unless we have a state of our own, we will never be able to experience a life of peace and decency, and never be free from persecution and oppression. After Burma gained her independence from the British, it has been extremely difficult for the ethnic nationalities and the Burman, with some diametrically opposite views, outlooks, attitudes and mentalities, to yoke together peacefully. However, differences in nature and mentality are not the main reasons for the Karen's refusal to throw in their lot with the Burman. There is more important reason, that is, to have the state of our own within a genuine Federal Union.

The Karen resistance movement is more than just a struggle for survival against national oppression, subjugation, exploitation and domination of the Karen people by the Burmese rulers. It has the aim of a genuine Federal Union comprised of all the states of the nationalities on the basis of equality and self-determination. Burma is a multi-national country, inhabited also by the Kachin, Karenni, Chin, Lahu, Mon, Pa-O, Palaugng, Shan, and Wa, etc. All these ethnic nationalities in Burma have taken up arms to fight against the Burmese Government for their own self-determination. The consolidated National Democratic Front (NDF) has resolved to form a genuine Federal Union,[again,] comprised of all the states of the nationalities in Burma, including a Burman state, on the basis of liberty, equality and social progress.

The ethnic nationalities, more than ever, are determined to fight until victory is achieved, and request the people of all classes and all walks of life to join hands and fight against the military dictatorship. As we all know, in late 1988, the Karen National Union took the initiative in proposing that the NDF form a broader political front along with the newly formed Burman organizations to meet the developing political situation. The other members agreed, and the Democratic Alliance of Burma (DAB) was formed, including all the members of the NDF as well as organizations such as the All Burma Students' Democratic Front (ABSDF) and the All Burma Young Monks' Union (ABYMU). This really marks the first time that the people of all races, even the Burmans, are united in trying to throw off the yoke of an oppressive Burmese military regime.

In Relation to the National League for Democracy (NLD) and Burma
Ethnic nationalities of Burma ardently support the people's movement led by Daw Aung San Suu Kyi of the NLD for democracy and the dismantling of the military dictatorship. Just as Daw Suu revealed her belief with regard to the Karen's struggle: "the plight of our Karen refugees should appeal to the compassion of all right-thinking people all over the world…," she also called on all the nations and all ethnic nationalities to join hands in solving the problems. I have no doubt that the ethnic conflicts in Burma can be peacefully and smoothly solved by having face-to-face dialogues, as clearly stated by the NLD:

1) Frankness, sincerity and mutual respect;
2) National reconciliation;
3) Practice of peaceful means; and
4) General harmony without hard feelings are essential policies which must be observed.
As genuine peace is the most essential to all the people of Burma, we do look forward to the courageous and candid cooperation of our fellow Burmans along the way of our struggle. The conflicts we have between us, the Burmans and the ethnic nationalities, has never been personal hatred, and we are responsible never to let it become one. The end of the military regime must be the end of all wars against the ethnic nationalities and their struggle for freedom. We cannot afford to have war after war as governments change. We must make sure that when we say peace in the future Burma, it means peace for all her inhabitants.

This paper was presented by Naw May Oo at the Free Burma Conference '97 held at the University of California, Los Angeles on October 4-6, 1997.